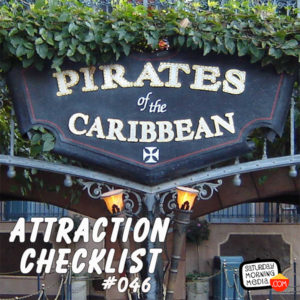 http://www.attractionchecklist.com – Yo ho, let’s head to Disneyland to sail past the Bride Auction one last time.  Along for the ride is David Marquez and after we ride we discuss our thoughts on this classic attraction and the planned changes.  Recorded on April 22, 2018.

This episode we head to Disneyland to ride Pirates of the Caribbean one last time before it closes to have the, some would say iconic, Bride Auction scene changed forever.  The current Disneyland guide map no longer features ride descriptions but the Disneyland website describes Pirates of the Caribbean by saying, “Celebrate 50 years of swashbuckling as you set sail on a voyage to a long-forgotten time, when pirates wrought havoc on the high seas.”  There are no age or height requirements for this attraction and the Thrill Level describes the attraction as being a slow water ride that is loud, dark and scary with small drops.

Before we visit the Bride Auction one last time, here are five fast facts about Disneyland’s Pirates of the Caribbean.

1. Pirates of the Caribbean officially opened at Disneyland on March 18, 1967.

2. Disneyland’s Pirates of the Caribbean is the last attraction that Walt Disney personally participated in designing before his death.  The attraction opened three months afterward.

3.  There are approximately 120 animatronics featured in the attraction including the pirates, the villagers and all the animals.  The ride also contains approximately 750,000 gallons of water.

4.  As guests first set sail on the attraction, the drift past the The Blue Bayou restaurant.  This popular dining spot is located in the same building as The Pirates of the Caribbean and it opened on the same day in 1967.  The restaurant was originally planned to feature live music but it is reported that Walt Disney said that the food and the atmosphere were going to be the show in the Blue Bayou.

5.  In June of 2017, Disney announced they would be modifying the Bride Auction scene in the attraction, turning the Red Head into a pirate who is helping auction off the town’s goods instead of brides.  The last day of the attraction in the form you will hear it today was April 23rd, 2018.  The ride audio for this episode was recorded on April 22nd, 2018.